2019 was an intense and record-breaking year for us at elementary. You can read about the monthly updates in detail, but let’s take a look back at milestones from the year—and then look forward to our goals for 2020.

Milestones by the Month in 2019

We’ve always been fanatical about privacy, but we kicked off 2019 by articulating and sharing our values more widely.

We also released a round of updates to Juno, including refreshed AppCenter category designs, code cleanup across several apps, and more accessible keyboard shortcuts.

In February, we launched our organization-wide Curb Cutting effort paired with a blog post about accessibility features.

We also released updates to Juno including a huge design and UX refresh for Calendar, fixes across several apps, small improvements to the visual style, and new features for developers.

We attended the GNOME Parental Controls & Metered Data Hackfest in March; we got together with GNOME, Endless, and more to work together on the UX and foundations for better parental controls and metered data support in GNOME and the underlying libraries that we all use. This work has begun to make its way into GNOME, Flatpak, and more—and we look forward to building on this work for elementary OS in the future.

We also pushed a slew of updates to Juno including improved git integration in Code, improvements across system indicators and System Settings panes, and bug fixes across several projects. Lastly, we announced our new native file chooser efforts and began moving all of our apps over to the new APIs.

We dropped the news that we were going with Flatpak for the future of AppCenter right on April 1, and it’s awesome to see that in the time since we’ve gone from an announcement to shipping Flatpak support out of the box. There’s still more work to do on the AppCenter back-end, but we’re well on our way to the vision of the future that we laid out.

The April updates to Juno included some improvements to Mouse & Touchpad settings, Display settings, and the system stylesheet. We also shared our best practices about a GitHub-based workflow for app development.

Throughout the year, I was conducting a study focused on custom styles, dark modes, and night light features. I concluded the study and shared my findings in May, along with my call for a standardized FreeDesktop Dark Style Preference.

In June, Karen joined our team to focus on customer experience, including fulfilling rewards for our Patreon supporters. We also introduced a new tier for Patreon to bring back stickers and introduce coasters.

On the Juno updates side of things, we improved the system stylesheet in several areas and released fixes for the Panel, Terminal, Location Services, and more.

Our big new feature for July was the new Onboarding app that welcomes users to elementary OS, and we shared the design process behind it in a detailed blog post.

July 30 was also Daniel’s birthday, where he challenged folks to make an effort to make a difference in open source developers’ lives. Juno updates in July included the shift to a color-neutral dark style, improvements to Files and Terminal, and other improvements to styling throughout the OS.

We officially migrated off of Medium in August, and wrote up the reasoning and experience right here on our new blog. We released the major overhaul to the login and lockscreen Greeter for elementary OS, fixing a ton of bugs and paving a smoother development future. We also pushed out updates to Date & Time settings, the Applications Menu, and the system stylesheet.

We participated at GUADEC—the GNOME User and Developer Conference—in Thessaloniki, Greece. We attended a ton of talks, gave one of our own, attended workshop sessions, and connected with folks across the open source desktop world.

In September we shared an update about the 5.1 release, including what had been causing some delays behind the scenes. We did release updates to Files with CloudProviders support and an improved design, Camera with better hardware compatibility, System Settings panes with various fixes, and Granite with various fixes and a new launcher API.

Behind the scenes, we continued working on 5.1.

We introduced the world to the new Sideload app in October—and with its release, elementary OS officially supported Flatpak out of the box. We also released a massive update to AppCenter that included Flatpak support, up to 10× improved performance, more information about non-curated apps, design improvements around screenshots, and offline support.

We rounded up several smaller fixes for Greeter, Panel, and the Date & Time indicator (along with its new design). We also redesigned Housekeeping settings, improved Bluetooth pairing, and improved the system styling.

In November, we shared several of our behind-the-scenes efforts to completely rework how package and OS releases worked. At this point, we switched completely over to automated builds and much more streamlined processes. We were rapidly building up to the imminent release of 5.1 Hera.

We also attended the third-annual LAS with folks from across open source desktop ecosystems including GNOME, KDE, Flatpak, Snap, and companies like CodeThink, Red Hat, Canonical, Purism, Endless, Pine64, and more. This past year it definitely felt like even more projects, companies, and platforms were well represented—and that LAS is becoming a real force in cross-desktop collaboration and community. We have a(n overdue!) blog post about LAS in the works, so stay tuned for the debriefing!

In December, we announced and released elementary OS 5.1 Hera. We’re happy to report that the first month of its downloads beat our previous records! We’ve served over 150,000 downloads so far, plus an uncountable number of torrent downloads (we offer an official magnet link when downloading, but other sites often repost and direct people to the torrent). Altogether, that’s over two petabytes of data transferred for new downloads of the OS in its first month—and that doesn’t count updates from all of our existing Juno users. We also served several terabytes of data for the website itself, AppCenter apps, and more. 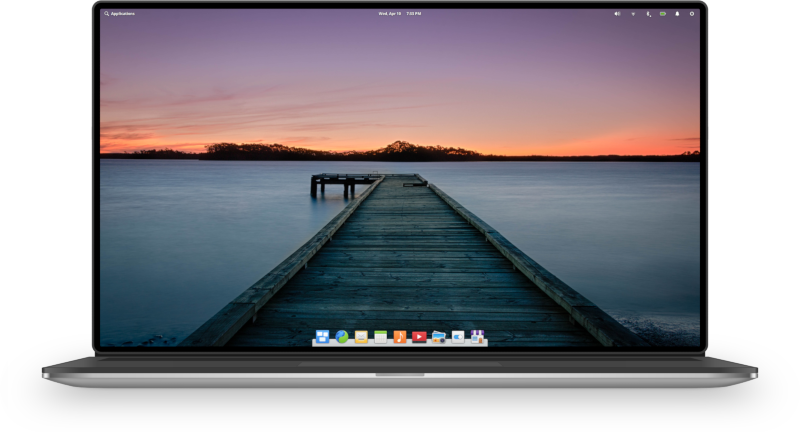 We’re also breaking records in another important metric: for Juno, about 0.9% of downloaders (yes, you read that right: less than one percent) chose to pay anything at all for the download. For Hera, that number is over 2%! While that number may still seem small, we believe it demonstrates that more people are seeing value in what we do in elementary OS. And with the millions of downloads that we get over several years, even a small percentage helps sustain us for the long term—more than doubling that percentage is a great achievement. Thank you to the 2%!

Throughout the year we made great progress on organization-wide projects. For example, we started tracking and closed several issues related to accessibility with our Accessibility Features are Just Features initiative. Similarly, we made a concerted effort to improve keyboard shortcut discoverability throughout the OS, with these improvements shipping to apps and desktop components alongside the monthly updates throughout the year.

Pantheon—the desktop environment for elementary OS—has become more distro-agnostic in 2019 as well; users of Arch, Fedora, NixOS, and others can enjoy the elementary desktop on their OS of choice thanks to the efforts of community members like Fabio Valentini, worldofpeace, and many more.

We also made significant progress on code cleanup and enforcing code standards across all elementary OS projects—we’re now using CI with enforced linting rules, automated releases, and automated translation template updates in most of our repositories.

What’s coming in 2020? If you’ve followed elementary for some time, you know we don’t commit to release dates in advance (When It’s Ready™). However, we do have some known events and goals for this year.

We look forward to participating at GUADEC again this year. It’s this summer in Zacatecas, Mexico; much closer to home than in the past for our US-based folks. We are also planning to attend the Linux App Summit (LAS) again this year. Details for date and location are still being sorted out.

Outside of those events, we have a goal to organize at least one in-person sprint or hackfest this year. Potential themes could be AppCenter, Flatpak, and/or elementary OS 6. We’ll share details once we have them!

Double-down on organizational goals. Yes, we have a goal to make goals. We’ve grown and improved dramatically as an organization over the years, but to ensure we remain sustainable to continue creating and improving elementary OS, we need to formalize real organizational goals. This means working with a professional business developer to analyze things so far and to plan for the future. Rather than changing anything about elementary, it’s more about articulating and vocalizing our existing goals—and ensuring we’re on the same page internally to best serve and engage directly with our users.

Flatpak, sandboxing, and Portals. Along with our big Flatpak efforts comes updating several components to use newer sandboxed APIs and implementing the many Portals available to apps. Some of that work intersects with becoming Wayland ready, and we’ve already made progress towards Screenshot being ready for Wayland—with other issues being tracked on GitHub. Even if we don’t ship Wayland by default in 2020, these fixes and updated APIs will still make the experience more robust and secure.

Improved gesture support in elementary OS. One area in elementary OS that we aim to significantly improve in 2020 is support for one-to-one touch gestures, like we recently added to Onboarding. We’re tracking this effort throughout the OS—there’s already a branch to improve gesture support in the Applications menu, the latest versions of Epiphany and WebKit sport gesture navigation, and we’re investigating navigation gestures across other parts of the UI.

More personalization in elementary OS. Much like you can set a wallpaper today, personalizing elementary OS or “making it your own” is an important aspect. In 2020, we plan to continue to investigate things like a dark style preference and user-definable accent colors. We’ve also begun some investigation into further color scheme settings for Terminal and Code—look forward to more ways to personalize elementary OS this year!

elementary OS 6. elementary OS is based on the Ubuntu LTS core and repositories under the hood. Ubuntu 20.04 LTS will be coming out this year, and subsequently we plan to release elementary OS 6 with a 20.04 base. We’ve begun some of the underlying work to migrate to and build against newer libraries, but much of that work still lies ahead.

Whew, 2019 was packed full of improvements—did we miss anything? And what else do you think we should tackle in 2020? Let us know on social media!